If you give an Italian a suit, he's going to want a pair of shoes

We have only been here a week and it’s happening. That thing when you visit a place for a while and you start behaving as if you’ve lived there all your life. Or in other words, “When in Rome, do as the Romans do.” Angelo comes by it honestly, of course—he was born in Italy. That’s why we’re here in  Muro Lucano--his hometown--for our sabbatical. We want to see what it’s like to be here for an extended period of time so that maybe we can incorporate it into our lives down the road. Being in Muro is good for me because it’s literally far enough away from all of my obligations—real and imagined—so that I can devote some time to writing.

But back to Angelo. One of the reasons we planned to be here in early September was the family wedding we are going to. It’s going to be a big wedding, a fancy wedding and as far back as April, Angelo began talking about getting a suit for it in Italy. A suit bought in Italy could very well mean jewelry for me, so I kept track of these musings carefully. As time got closer, Angelo identified a location: Naples. He wanted to buy a suit in Naples a day or two before the actual ceremony. It wasn’t looking good for me and my new gold locket, since we are without a car.  I wasn’t sure how we were going to get to Naples from Muro and then to Paestum for the event.

But leave it to the Italians to figure out how to get someone a suit. It turns out, one of the uncles knows a guy. Actually, most of the uncles and cousins know this same guy. By the time Angelo’s brother Vittorio arrived from the States, there was a plan. One day, after lunch, off they went to Potenza to go to THE place in the area to buy a suit. It’s called “Redford” so everyone here explains it is just like the actor, “Ro-bert Red-ford” with the obligatory Italian accent. (You have to roll the Rs.) I stayed home, for many reasons, not the least of which is that there would have been four of us in the back seat. No thanks. I’m here to write (and nap, since lunch here is like a four course dinner back home).

After a couple of hours, I received a text with a picture: 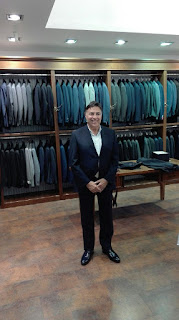 Angelo had found a suit. I noticed that the shoes he was wearing were not the shoes he had worn out the door that morning. They were shiny. And black. I could almost see the longing in his eyes. And his smile says, "You know what we're talking about when I get home, right?"

But he didn't want to talk about it when he got home...in the morning, he suggested. More time to develop a solid rationale, I suspected.  The cost I imagined in my head increased another $200; my new locket and gold bangles might have to wait. But I would remember.

Uh-huh. I waited. It only took another minute…